2.4. Comparative Advantage and Gains from Trade

The table below collates exhibits 8 and 9 from the curriculum. It illustrates the effect on production and consumption under autarkic (no-trade) and post trade conditions.

Interpretation of the table:

Open economy: The UK and India trade with each other

A country’s gains from trade are more if the terms of trade are closer to the partner’s autarkic prices than to its own autarkic prices. Terms of trade = price of exports/price of imports. In this example, India exports clothes to UK. Assume one yard of cloth in India is INR 5 while it is ₤5 in the UK, which is much higher. If India exports at a price much higher than the domestic price and closer to the UK price, then its gains from trade are more.

Production possibility frontier (PPF) is a graph that shows the maximum output possible of one good (cloth) for various outputs of another good (machines). PPF (the dark line) is plotted in the graphs below to show gains of trade with increasing costs for UK and India. Take the PPF for UK, for instance. As we move along the dark line from left to right, the production of cloth goes down and that of the machines goes up. Similarly, India gains more by producing cloth than machines. Under autarkic conditions, the consumption for both the countries must be on the PPF.

If the countries trade with each other, then the consumption is outside PPF as shown at points E, and the utility is more.

PA  is the autarkic price line. 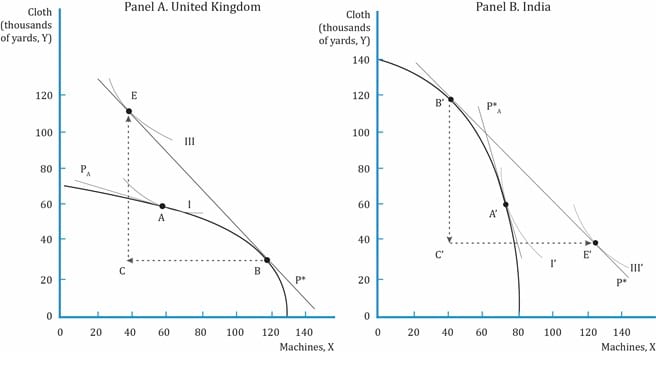 For example: shift in IT from developed countries to India over the past two decades. The HO models uses a capital/labor ratio. If this ratio for a country A is greater than country B, then A is capital abundant while B is labor abundant. Similarly, good Y is capital intensive over good Z if the capital/labor ratio used in producing Y is greater than Z. Z in this case is labor intensive.

For example: steel is a capital-intensive industry; clothing is a labor intensive industry. The U.S. is a capital abundant country while India is a labor abundant country.   Allows for income redistribution through trade. Income level for labor working in an abundant industry goes up, but has a negative impact on the scarce factor. The demand for an input is called derived demand.

Solution 2: Gains from trade are higher if the terms of trade are similar or closer to the autarkic prices of the trading partner.

I have already signed up